Multiple health insurance policies -How to claim from all?

Before proceeding further, let us understand why we try to buy multiple health insurance policies. There are many reasons and few of them are as below.

Now let us understand few terminologies which are used in case of general insurance.

If a policyholder buys insurance plans from different health insurance providers to cover a specified health event. In the event of a claim, then the insurer reserves the right to seek the proportionate amount of claim from the other insurers as well basis this principle.

However, after the changes in IRDA regulation 2013, there are some changes to this contribution clause. Let see what IRDA Health Insurance Regulation, 2013 says ”

a.  In all such cases the insurer who has issued the chosen policy shall be obliged to settle the claim without insisting on the contribution clause as long as the claim is within the limits of and according to the terms of the chosen policy

b.  If the amount to be claimed exceeds the sum insured under a single policy after considering the deductibles or co-pay, the policyholder shall have the right to choose insurers by whom the claim to be settled. In such cases, the insurer may settle the claim with contribution clause.

c.  Except in benefit policies, in cases where an insured has policies from more than one insurer to cover the same risk on indemnity basis, the insured shall only be indemnified the hospitalization costs in accordance with terms and conditions of the policy”

I will sum up the whole thing. If you have fixed or defined benefit plans, then the contribution clause will not come into the picture. This I already explained above.

-If you have fixed or defined benefit plans, then the contribution clause will not come into the picture. This I already explained above.

-If you have indemnity plans, then based on the cases the contribution clause can be invoked.

What are the cases where such contribution clause can be invoked?

Let us try to understand this whole funda with few examples. 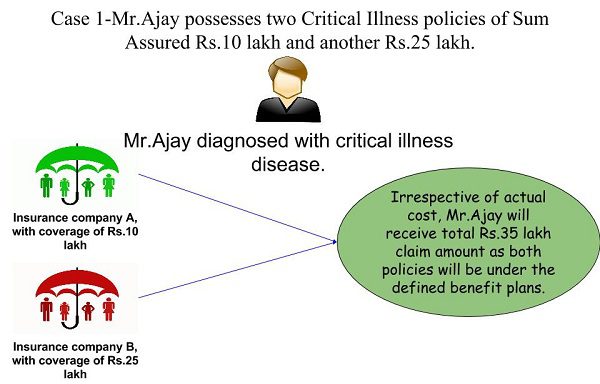 You notice, that critical illness or accidental insurance policies will come under defined or fixed benefit plans, both companies obliged to pay the FULL SUM ASSURED (subject to post fulfillment of the terms and conditions of the plan). Once the claim amount paid, then policy seizes there itself. 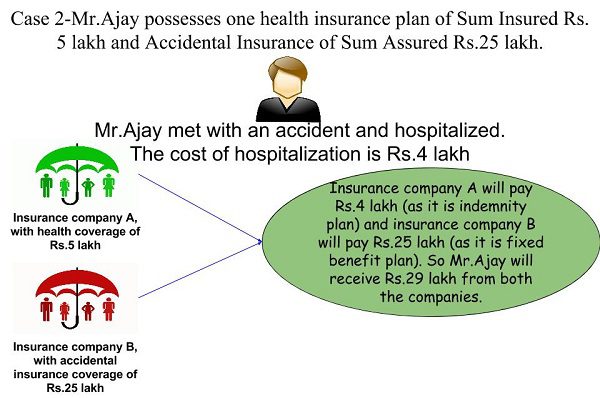 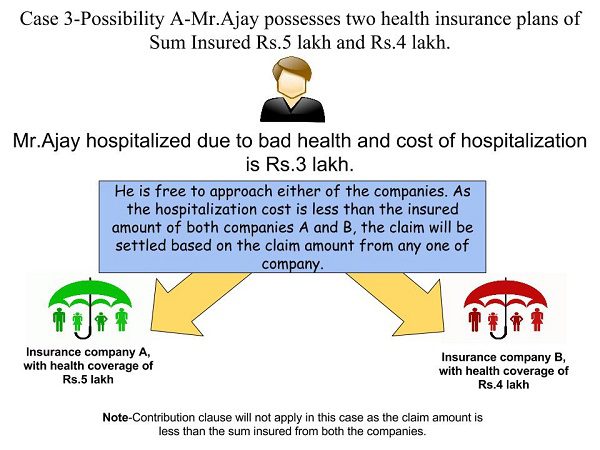 In such a situation, if he approaches the insurance company A, then the contribution clause will not apply. Insurance company A will settle the amount (subject to condition) easily as the claim amount is less than the sum insured under the plan.

I explained the above scenario in below image. 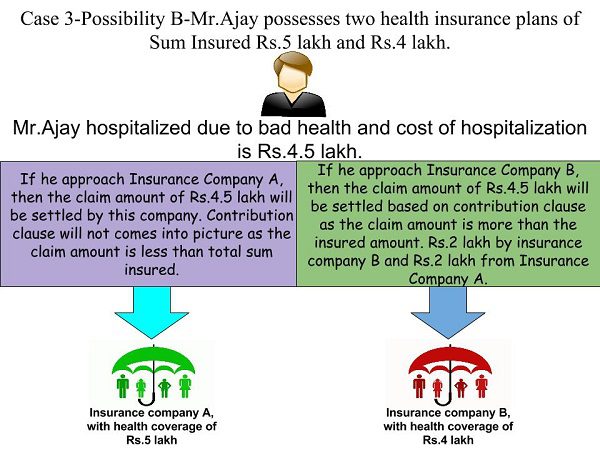 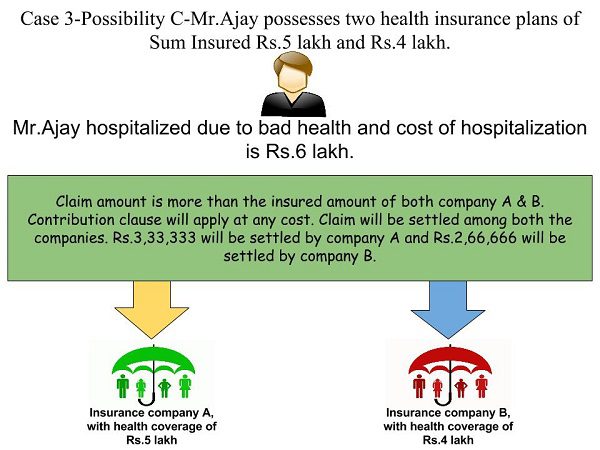 Hope all scenarios are now clear. Let us now discuss the claim process in case of single policy and multiple policies

It is imperative to inform all the insurers about the event.

# In case of Reimbursement:

Collect all the requisite documents from the Hospital and submit the required ones to the respective insurer you are filing the claim from.

(Requirements and documents may vary from insurer to insurer)

# In case of Cashless Treatment:

The chosen insurer or insurers will settle the claim directly with the hospital as per the limits of the health plans and later the contribution clause may be exercised, or you may follow the claims process of the respective insurer from whom you want to claim the balance amount as per the claim specifications.

Few points to note regarding having multiple health insurance products-