Recently LIC declared the bonus rates for the year 2016-17. Let us see the complete details about LIC Bonus Rates for 2016-17 and how they affect your life insurance returns. 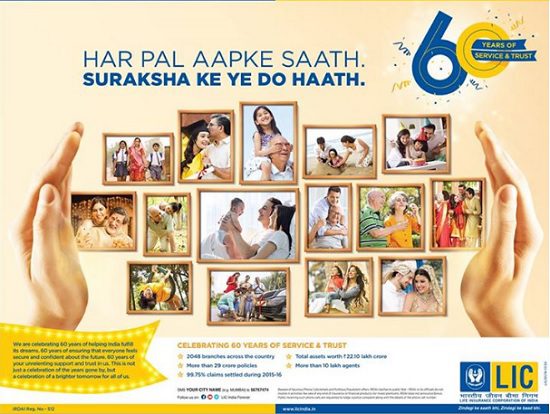 What is the meaning of bonus for LIC policies?

When you buy a traditional with profit product from LIC, then your returns from such policy mainly depends on what will be the rate of bonus. LIC declares bonus on the yearly basis. Usually, you will not find any such drastic change. But it is always better to track the bonus rates.

Let us say you bought LIC’s Jeevan Anand for the term of 20 years and sum assured as Rs.5,00,000. If LIC declared bonus as Rs.45 for this product, then the calculation will be as below.

The bonus rates will be based on three criteria.

# Term of policy-Higher the tenure means higher the rate.

# Sum Assured-LIC bonus depends on per Rs.1,000 of Sum Assured. Hence, if you bought higher sum assured policy, then your bonus accumulation will be at the higher end.

So from above example, if LIC declared you Rs.45 as bonus per Rs.1,000 sum assured for 20 years policy, then the bonus accumulation for that year will be as below.

In simple, I explained how to calculate bonus for a year. But LIC offers different products like the endowment, limited endowment or money back plans. In such a situation, you may find it difficult to calculate returns on your LIC plan. Hence, I created a video about this.

This below video will explain you about how to calculate returns on your LIC plans using excel sheet. It is too simple and convenient for you to calculate.

Hope you got the clarity about the importance of bonus rates for your traditional plans. Now let us concentrate on recently declared LIC Bonus Rates for 2016-17.

The below rates are for the revisionary and interim period. Revisionary bonus rates are applicable for policy year entered upon during the inter-valuation period i.e. 01/04/2015 to 31/03/2016 and in force for full sum assured as on 31/03/2016.  It would apply to policies resulting into claims by death or maturity (including those discounted within one year of maturity) or surrendered on or after 01/01/2017.

The interim bonus rates are applicable to policies in respect of each policy year entered upon  after 31/03/2016 and result into claims by death or maturity (including those discounted within one year of maturity) or are surrendered during the period commencing from 01/01/2017 and ending 9 months from the date of next valuation.

Above rates are for all closed plans. Now let us see the LIC bonus rates for 2016-17 for existing new plans. 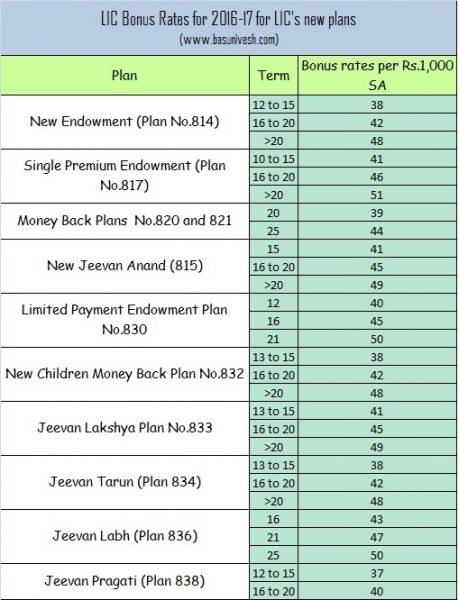 Points to be noted-

Along with this regular LIC Bonus Rates for 2016-17, this time, LIC declared “One Time Diamond Jubilee Year Special Reversionary Bonus” on the occasion of 60th 60th-year-anniversary celebrations.

The One Time Diamond Jubilee Year Special Reversionary Bonus Rates payable per Rs.1,000/- Sum Assured [Cash Option in case of New Jeevan Suraksha I (Plan 147) and New Jeevan Dhara-I (Plan 148), Death Benefit Sum Assured in case of Jeevan Madhur (Plan 182) & Premium Paid for Jeevan Amrit (Plan 186)] for policies in force as on 31.03.2016. The rates are as below.

The policies which are in paid-up condition or are lapsed without acquiring paid-up value as at 31st March, 2016 shall also be eligible for this One Time Diamond Jubilee Year Special Reversionary Bonus provided they are subsequently revived for full sum assured and otherwise eligible for reversionary bonus as per terms and conditions of the policy 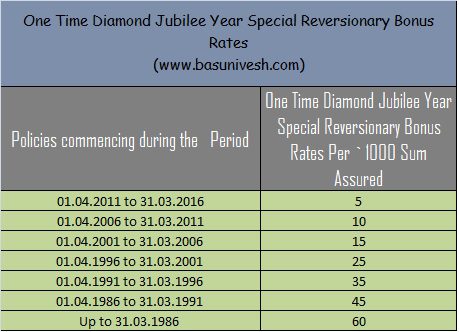 The above One Time Diamond Jubilee Year Special Reversionary Bonus Rates shall be applicable for policies which are in force on the book of the Corporation as at 31.03.2016 by payment of full premium and eligible for regular reversionary bonuses and continuing in the books of the Corporation on or after 01.09.2016.

So, One Time Diamond Jubilee Year Special Reversionary Bonus shall not be payable to policies during the free look up period if free cover period starts before 31.03.2016 even though policies are in force in such period.

One Time Diamond Jubilee Year Special Reversionary Bonus shall be decided in the same manner as simple Reversionary bonus rates are decided for the plan.

The One Time Diamond Jubilee Year Special Reversionary Bonus is not payable to without profit policies, the policies under which guaranteed additions have been added during the inter-valuation period and polices under which loyalty additions are payable as per terms and conditions of the plan.

Jeevan Saral was the unique plan. There will not be sum assured but MATURITY SUM ASSURED. Also, Jeevan Saral plan not offers you the bonus. Instead, LIC provides Loyalty Addition to Jeevan Saral plan. This LA will be applicable to those plans which completed 10 years or more.

The LA rates are as below.

There is a raise in LA rates of Jeevan Saral. However, I still feel the final returns will hover around 5% to 6%.

Under Jeevan Saral (Plan 165), provided at least 10 years premiums have been paid under the policy and policy has been in force for at least 10 years, the loyalty addition is payable on exits by maturity or death or surrender per thousand maturity sum assured for the complete duration for which the premiums have been paid. Provided further that loyalty addition is also payable if death claim occurs in the 10th year of the policy and the policy then is in full force.

Along with LIC Bonus Rates for 2016-17, LIC declared Final additional bonus (FAB) and Loyalty addition (LA). FAB and LA are not applicable to all policies. They are paid as per the policy features and conditions. No LA will be payable if you surrender the policy in between (except Jeevan Saral).