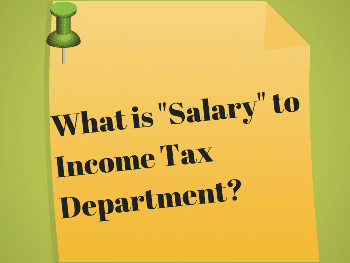 So if payment received by an individual from a person other than his employer can not be treated as salary and hence not taxed under the head of “Salary”. For example if college lecturer receive any emoluments for academic or non-academic work is treated as salary. But if another university paid amount for setting up question paper to him is not treated as salary, as in this case there is no relation between employee and employer.

5) Salary must be real but not fictitious-For example, let us say there is any agreement between school and a teacher for granting certain salary to teacher and simultaneously there was an another agreement by which the same teacher will agree to return the same equal sum to the school as donation. Such set up is not treated as salary. So in such set up it clearly understandable that there is no real intention to pay the salary but it was set up to show like that. In a similar way if there is no intention to render service and any agreement so made is also not to be treated as salary.

6) Salary is taxable on “Due” or “Receipt”basis-Salary will be taxable either on Due or Receipt basis whichever is earlier. To understand it in a better way, let us say you joined any organization on June 1st 2013 and it is the condition that Salary will become due on first day of the next month but will be payable on seventh day of next month and we assume that from 1st April 2013 to 1st June 2013 you don’t have any prior salary income. Then the calculation will follow as below.

8) Salary paid tax-free-If salary is paid tax free by employer, then the employee has to include in his taxable income not only salary received but also amount of tax paid by employer. There is no difference between whether the tax paid under terms of contact by the employer or employee.

9) Voluntary payments by employee-Any voluntary gifts in whatever name should also be treated as salary and included while taxing.

11) Advance Salary-Let us say in the month of March 2014, you received two months advance salary (April and May 2014 Salary) then for financial year 2013-14 total number of salaries will be 14 (12 as usual and 2 months advance salary) for taxation. Similarly for 2014-15 only 10 months salary will be taxed (as April and May months salary falls under previous financial year). Hence salary will be taxable on receipt base.

12) Arrears Salary-Any arrears received in any financial year is taxable income if and only if it is not taxed previously on “Due” basis. For example let us see below two situations.

Hope above information will give you new meaning to you.