Do you know the biggest real estate scam of Bangalore? It’s in the name of companies like Dreamz Infra India Ltd, Gruh Kalyan and TGS Properties.

Why am I writing about these scams? How I personally interested about these companies? Let me tell you in detail about this. Way back I think in 2015, there used to huge advertise in newspapers, TV, and other media about the real estate company called TGS Constructions Pvt Ltd. Because at that time this company was the official partner of the IPL Team of Bangalore Royal Challengers. See the below offers of the same. 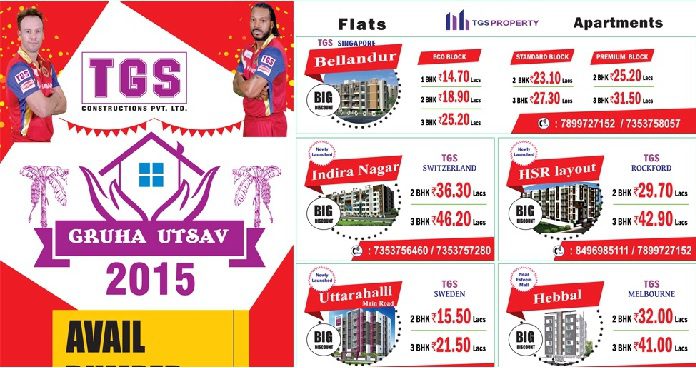 Even I too surprised with the price they quoted. Who doesn’t want to own a flat in Bangalore at such damn cheap price? I and my brother went to the Kengeri Office of TGS Construction Pvt Ltd. They showed the property which is nearest to the Global Village IT Park Rajarajeshwari Nagar.

They showed us some vacant areas where they will construct these flats. Forced us to book and promised us that they will deliver the project within promised date.

However, I simply asked the cross question to the executive about their completed project. He nodded his head and told as of now they have not completed a single project. This surprised me a bit. However, while returning from that company provided cab, the driver revealed the real truth.

He advised me and my brother that not to believe in this company. He revealed that if there are around 100 flats or sites, then they are booking more than that with a promise to register all those who book. Also, once we book then we have to bend like what they say.

He revealed all these and advised us that not to buy. That actually shocked both of us. So we dropped the idea of going with them.

Now recently I came to know that the men behind this company cheated many of buyers and now are under arrest.

What prompted the public to invest in this biggest real estate scam of Bangalore?

The price quoted by these companies are so cheap that you are forced to buy. This led to many middle-class or upper-middle-class people to invest. Because owning a house is a dream for many of us. Also if such dream is at lowest rate, then who will hesitate?

But many forgot to cross check the builder’s claims and legality.

# Lot of advertisement through stars

These companies advertised using the IPL sportsmen. Hence, all started to believe that the companies financials are unquestionable. Because if they hire international sportsmen then how can they cheat us?

We Indians are of strong belief that GOLD and REAL ESTATE prices never fall. Also, the booking real estate of Bangalore prompted these investors to go ahead and invest.

When did the trouble start?

These companies as per news reports booked the flats and sites from around 5,000 people and the money involved is around Rs.1,500 Crore. The trouble started when the promised date of handover the property or registration of sites did not go smoothly.

Customers started to force the company to return their booked amount. Proof of this is in below video.

As per news reports, the owner of the company Mr.Sachin Naik issued cheque to all those customers who requested for refund of money. However, customers shocked when their all cheques bounced which in total the worth of Rs.50 Crore.

After examining the property records of this company, it is found that land is still registered with the developer but not in the name of buyers.

Who is the mastermind of this biggest real estate scam of Bangalore?

As per news reports, the mastermind is Mr.Sachin Naik and his team. This team involves his wives and also other associates. It is alleged that he changed his name and identity and hatched this scam.

Also, along with few associates, he launched many companies in real estate and other business and conned many people. Their history starts from way back of 2008.

What do the investors now?

As per this news report, Karnataka Chief Minister ordered the CID Probe into the multi-crore biggest real estate scam of Bangalore. Therefore, the big battle and long wait is the only option left with all those who invested in this company.

What can we all learn from this biggest real estate scam of Bangalore?

Cross check each and every point of what your developers claim. Especially if they are claiming orally, then you have to be more cautious. Cross verify the agreement documents properly for the claim they are committing orally.

Also, never rely on the employees of the company. Usually, the employees who work in such companies never stay more than few years. Hence, investing based on these employees claims may be dangerous.

The biggest risk is the industry itself not regulated. Even though Government ready to implement the Real Estate Bill into reality, but still I feel this bill not protect buyers to the maximum extent. Also, if the builder breached the law, then are you ready to fight against him by going off from your regular work? No right? This is well known by these developers.

# Stars associated with these builders will not rescue YOU

If you invested in any product by the advertiser from the stars, then keep in mind that they are doing so for the sake of their OWN earning. They will never come to your rescue when you are in such difficulties.

Hence, never rely on advertising or tall claims of such these stars do.